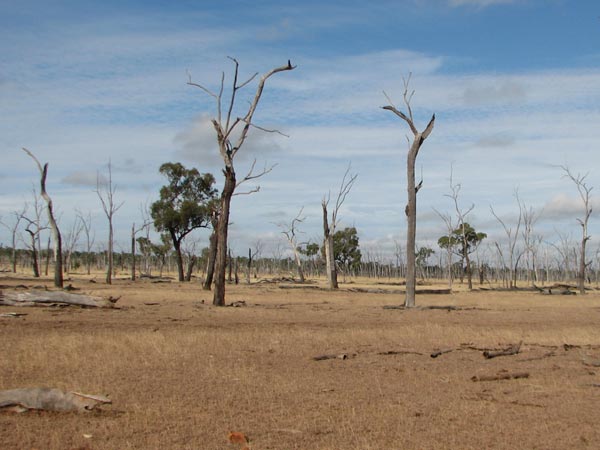 A few months ago I was in southern NSW. A group of us were going out to see a property after lunch, which was about 50 minutes away. Just prior to lunch and during lunch we were rejoicing over some good solid rain. It turned out to be between 11 and 20mm in about an hour. Just what the doctor ordered in a drought, you would think.

However our journey revealed a different story. Almost every dam we passed was by-washing, water was gushing off paddocks and down the gullies and the run-off was thick with silt. As we drove back 4 hours later, water was still sitting on top of the soil on the flats.

The entire landscape looked like it had been ploughed. It hadn’t been, it was just over stocked and overgrazed. My realization was that rainfall will not end the drought in this district, and this district is not on its own. That is a shocking condition for the national estate to be in.

That prompts the question – what caused the landscape to be in the condition it is in? Most people will say lack of rain, but I disagree. The condition of much of our landscape is a function of lack of effective management of the lack of rainfall – and not just the current drought. Getting a landscape to a hygroscopic state, has not just happened via this drought. It is an accumulation of mis-management over generations. 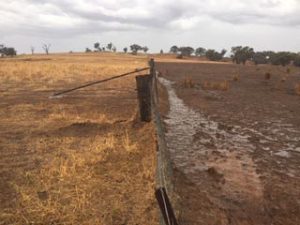 The property we visited was a clear example of the fact that it does not have to be like that. Here the water gushed off neighbouring farms and as it hit the grassed paddocks, the water infiltrated immediately and within 50m of the fence, it had all soaked in.

The tools and management practices which led to the stark contrast have been around for 30 years, including the 90’s drought, the 2003 drought and every other one since.

There is always a cost in a drought. The difficult thing is to restrict the cost to a financial one. However frequently, due to lack of a solid drought plan, there is a cost to the land, the livestock and the people in the business, on top of a financial loss. The losses compound which then takes away any opportunity to profit from the small falls of rain that do occur.

I was prompted to write this by an email received in response to Raymond Stacey’s last newsletter article. Here’s the email:

I read your newsletter ‘If you can’t see it, you can’t eat it’ with interest.  I have driven between South East Queensland, the Northern Territory and northern Queensland on inland roads at various times during the previous three years, and been struck by the increasing amount of run-down country with cattle still on it, that I’ve seen over this time …

I have wondered what the point of this is and whether this type of land management is supported by the wider industry.  To the outside eye it appears senseless for the reasons stated in your article… Your article made it clear how hard it is to manage large areas of land with insufficient and unreliable rainfall and I appreciated learning this.  However, widespread run down country isn’t a good look for the industry, and unfortunately it is these areas I remember more than the country where grass and shrubs/trees are in tact. Even though it is by comparison with these areas that one concludes overstocking above drought, is causing this land degradation.

It is a good thing relatively few outside people travel through these areas. In my view it is a tragic vision, especially if degraded land is next to a national park, what the country could be and what it actually is. Not at all in line with the idea that Australian food is ‘green’.  It is also a scene ready to be exploited by those who want to curtail the activities of the livestock industry.  My sentiments and own interests are with the agricultural industries – my father was a farmer and I work in fruit packing sheds – however seeing this badly run down land has turned my sympathies away from graziers and I am sorry to say this.

I had not been drinking when this arrived, but if I had, it would have sobered me up quickly. This is from someone who is on our side but it clearly illustrates that the social licence for graziers to continue business as usual, is on the wane.

Further evidence of the slow withdrawal of the social licence to degrade land is the legislation being put through in Queensland, where policy has now switched from the carrot to the stick. 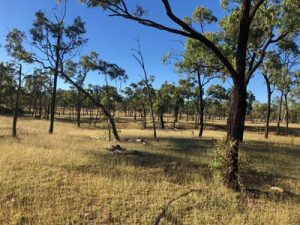 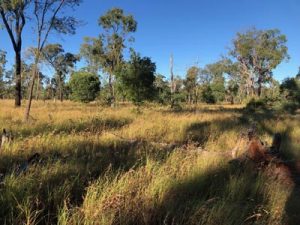 The photos above, taken by Raymond recently, illustrates what the author of the email was talking about. The first picture is Indian couch, a pioneer which thankfully protects degraded country. The second picture is in a nearby National Park and the Kangaroo grass, a high successional plant, is very evident. It is not the difference in yield which is important, because obviously one has been grazed. What is important are the indicators of the ecosystem health, such as the tree dieback, the indian couch, the browse line and the lack of shrubs, in the grazed country.

The following two properties are also in the same district and illustrate that it is not lack of rain that creates the environmental issues, but the management of the rainfall we get. 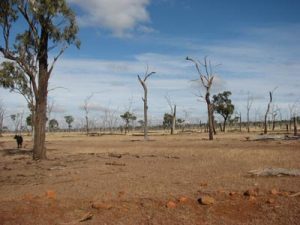 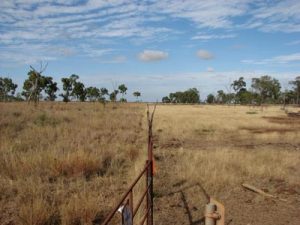 It is time we started to call a spade a bloody shovel.

We have national drought policy which rewards unsustainable management instead of encouraging future-focused management. We have extension systems which, in many cases, have encouraged poor drought strategies (e.g. drought feeding) rather than changing the status quo. It might be the circles I mix in but the vast majority of graziers do not want to be tarred by this brush and want drought policy reversed so it rewards good management instead of bad.

Unless this happens soon the chickens will come home to roost for the grazing industry with more legislation and no social licence to continue with business as usual.

Transient part-owner of the National Estate.