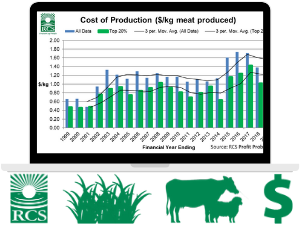 The 2018/19 financial year will go down as one of the driest and hottest in recent memory (and the first half of 19/20 isn’t showing many signs of change).

Variability is ingrained into agricultural life.  The timing, amount and distribution of rainfall has presented both extreme management challenges and opportunities.

The beef industry price experienced volatility with a quick drop due to the excess supply around March 2019, however recovered to finish the financial year pretty well where it started.

The sheep industry saw meat prices rapidly increase to record prices during the year, opposite to what the wool market did. Although in historical terms, the wool market remains very strong.

Grains and pulses remained very strong due to low supply and high demand for both processing and stock feed.

So, after putting all this into the mixing bowl, just what recipe provided the best economic results in the latest ProfitProbe™ data?  There is no recipe, not in the way that many people wish there were.  The most profitable businesses as measured by ProfitProbe™ had characteristics that many salesmen would consider quite boring!  What they did was they managed their costs and optimised their productivity in the conditions they were dealt.  The Top20% of businesses (measured by return on assets, ROA) were in a combination of sectors (cattle, sheep, cropping).  They were dryland and irrigation; breeding, growing and trading; and had a range of breeds/varieties.  Our ProfitProbe™ benchmarking (backed up the analysis the RCS Team does during on farm consults) consistently shows that it isn’t what you do, it is the decisions you make around what you do and how well you do ‘it’.

Looking into the data of the businesses that did get into the Top20% this year, I did notice two key factors.

They did the basic stuff pretty well, kept looking ahead (a.k.a. planning) and didn’t panic.  Now this isn’t sexy so you won’t hear it talked about much, however it is really powerful.  To be honest, if we spent less time on the sexy stuff (putting on kgs/maximising yield) and more time on fundamental decisions that increase margins (income minus costs) the whole industry would be better off.

Onto the ProfitProbe™ benchmarking results for this year.

ProfitProbe™ is a detailed process of economic benchmarking, where the cash and non-cash components of running a business are included in the analysis.

The ‘Top20%’ benchmarks quoted in this report are the results achieved by the top 20% businesses as ranked by the highest return on asset (ROA) – i.e. what are the characteristics of the most profitable businesses.

The Top20% achieved a 5.7% ROA for the financial year with the average ROA for all businesses who completed benchmarking 1.8%.  Returns from increase in land value are additional to this return, so when combined, you could surmise that overall returns are better than bank interest in the current economy. 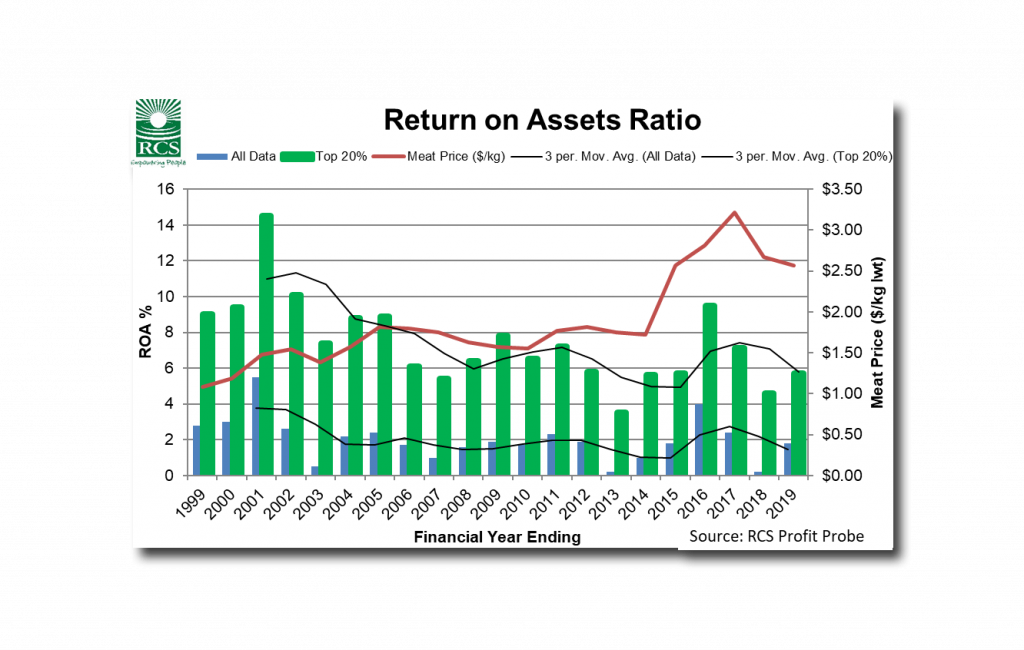 The three-year ROA results from this year are very similar to what we saw ten years ago.  For cattle and sheep businesses there is one distinct difference – the cattle market has risen nearly 50% since then!  What is driving this? 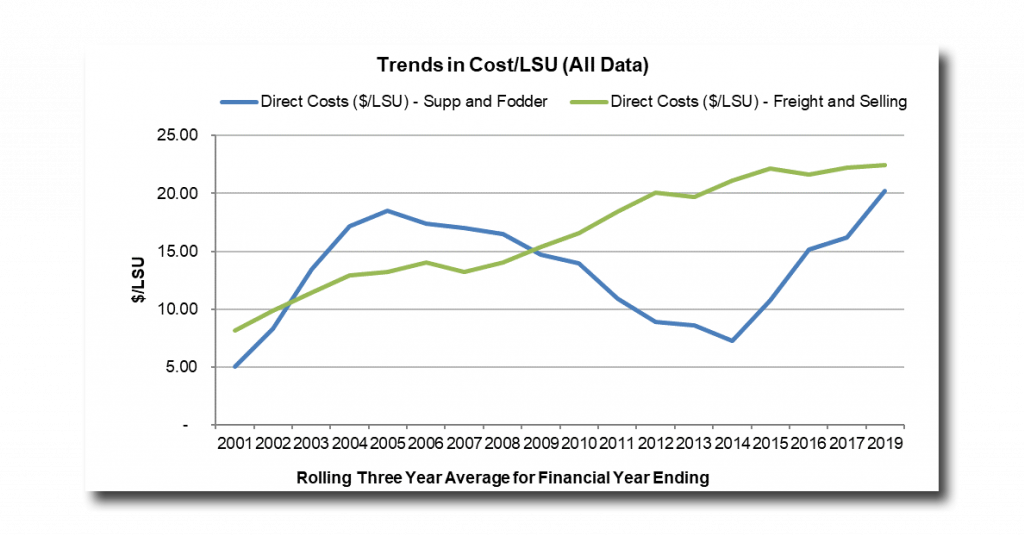 Overall, the direct costs per animal unit have flattened out in the past 10 years as seen below.  The overhead costs on the other hand continue to increase at a concerning rate. 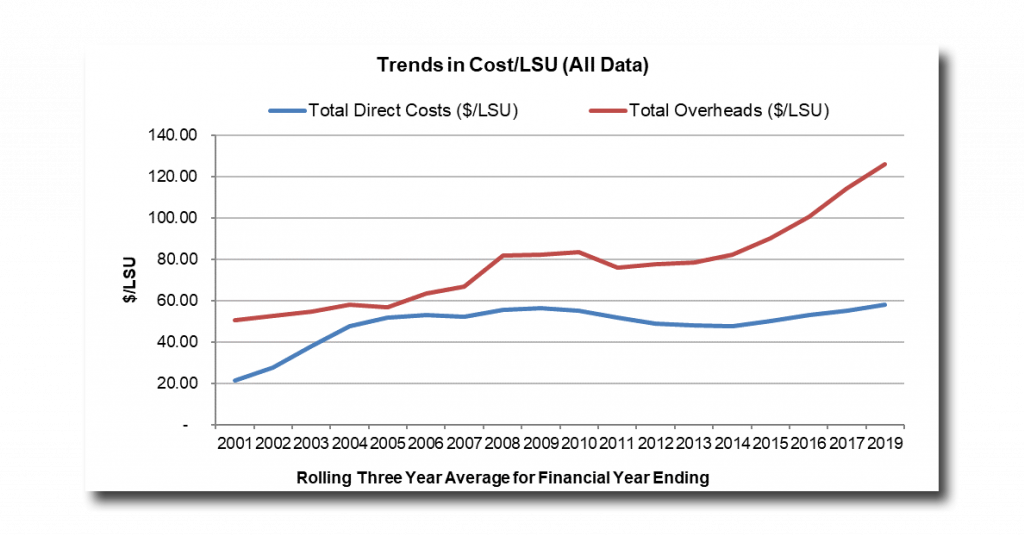 A thought has been churning away in my head regarding this ROA trend. Is the limiting factor to what ROA a business can achieve a mental/attitude limitation and not a business/industry/market limitation?  Are business owners reaching their minimum desired profit levels and then starting to coast along in the ‘comfort zone’?  I look at what my parents were able to achieve in educating three boys through boarding school (an amazing feat) and feel as though when the goal and timeframe are clear enough people ‘find’ ways to produce the profits that achieve the desired goals. When the ‘need’ to achieve certain profitability isn’t as clear, do the motives and drive for profit change?  So, is the limitation a lack of true ownership of clear goals? Time will tell.

The Three Secrets of Profit

The gross margin ratio indicates how much gross product (cash and non-cash income) is left after paying for direct costs.  The Top20% at 64% are right on what I feel is a good target (greater than 65%) whilst the average result came up to 55%.  Overall a much stronger result compared to last year. 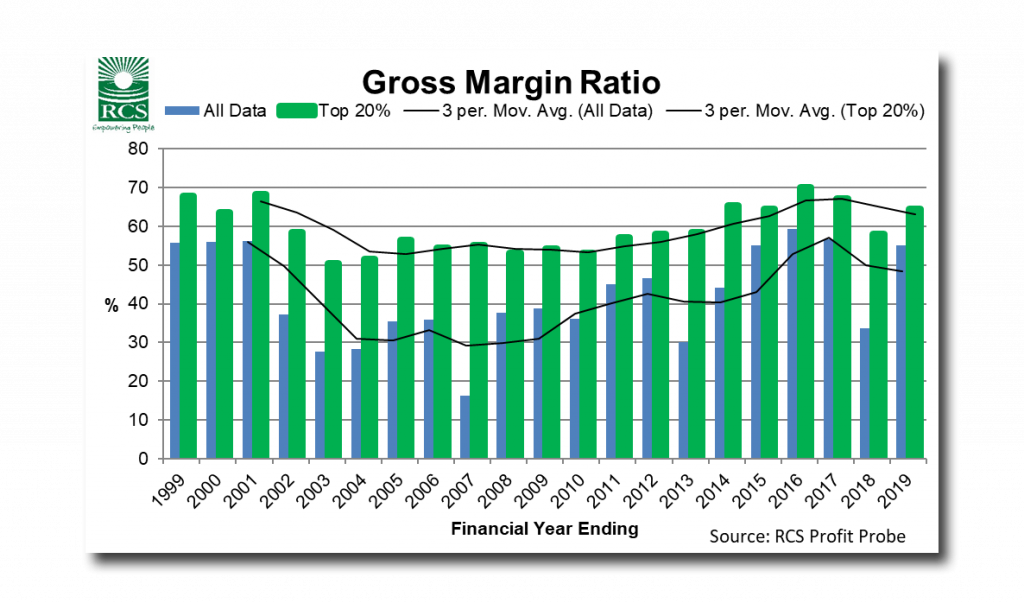 The overhead ratio indicates how much gross product goes towards paying for our overhead costs in the business.  Those businesses achieving the highest ROA each year have either been able to manage their total overhead costs and/or been able to dilute these costs by higher relative gross product.  Top20% overhead ratio was 31% compared to an average of 60%.  The target is under 35%.  The relationship between this metric and profit is clear as shown by the consistent gap between the Top20% and average results below.  If a metric isn’t consistently a driver of profit, you see the Top20% and average results closer together with no clear difference between them. 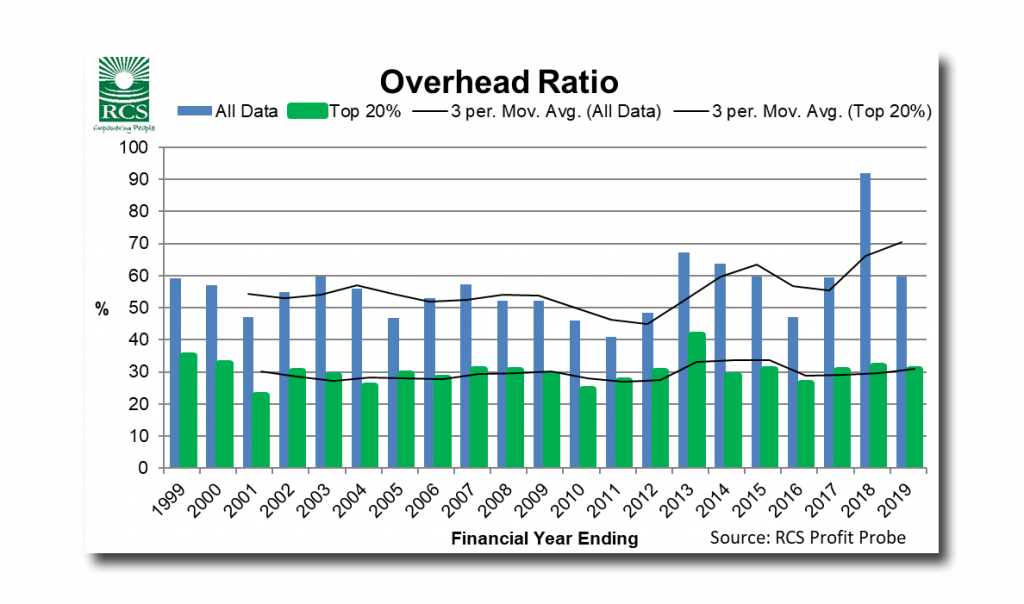 Turnover continues to come under pressure.  The turnover ratio indicates how active our assets are by comparing total gross product to the total agricultural assets under management. Increasing land value is the primary reason for this trend.  The Top20% turnover ratio was 11% and the average result was 7%.  Historically the target here has been greater than 15% however I feel the target now is greater than 13%.  Some options to increase turnover are: increase yields, lease/share farm/agist, relocate, stack enterprises, enterprise change/improvement.  Any changes must be profitable with consideration given to gross margin and overhead ratios and overall cost of production. 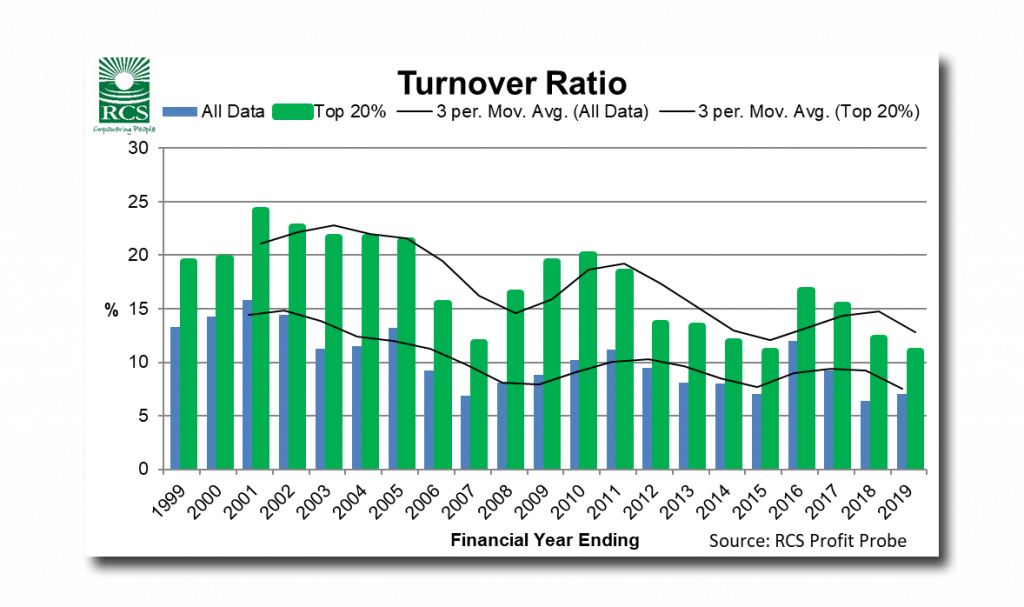 If you want to analyse your business without the un-controllable influences of market prices, then cost of production (COP) remains the best number in my opinion.  The drop in COP last financial year wasn’t repeated this year and the Top20% COP increased to $1.16/kg compared to the average of $1.61/kg.  These results only include direct costs and overhead costs to run the business and exclude interest.

COP is an indicator of our ability to withstand market variation.  Financial success doesn’t come from how much we produce, what we get paid or how miserly we are.  It comes from the DIFFERENCE between what the market pays us and the COP (costs divided by production).  If you went through your business and considered every cost line item as an investment, what return on investment are you getting from each one? Could it be better?  Have you looked to see what the trends are in your business across time?

I am concerned about the $1.61/kg average, as it simply doesn’t provide a big enough margin to achieve most businesses goals (e.g. growth, expansion, re-investment, other investments, debt reduction, succession, management transition etc.). 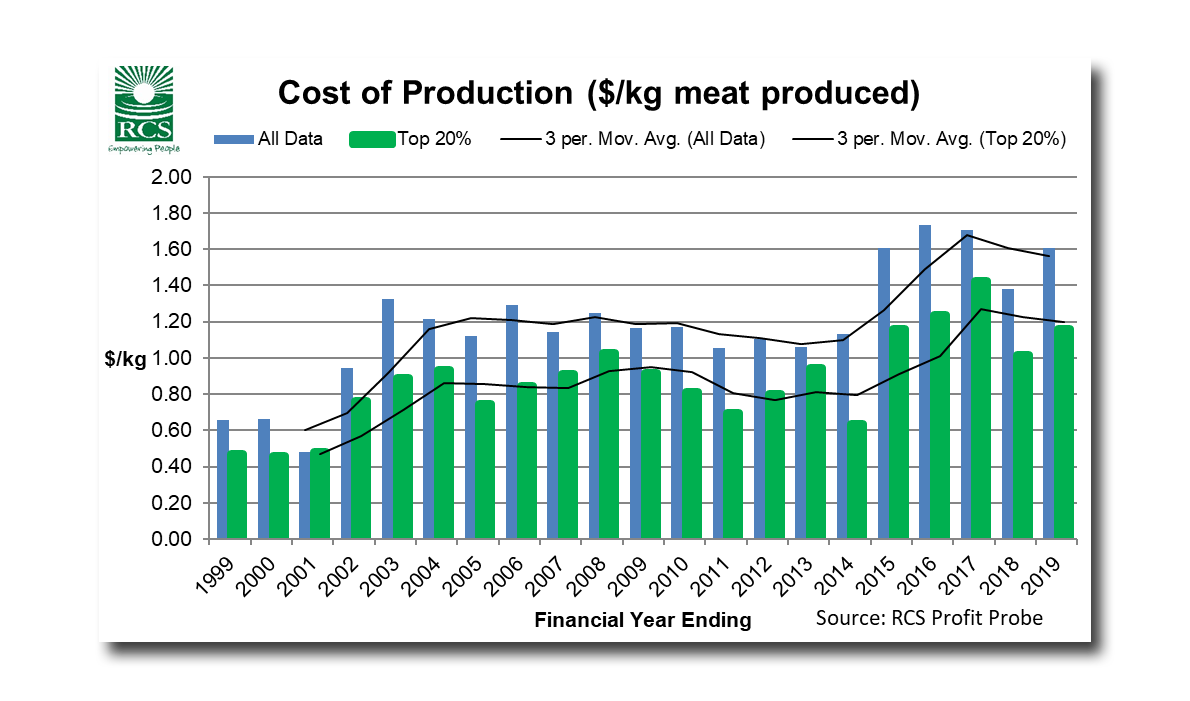 A number that previous readers will have seen is the expense ratio.  This is the relationship between the economic value of production (gross product) and the total costs (direct costs + overhead costs + interest costs). If it is over 100% then we’ve spent more than we’ve earned.  In economic terms, the average producer was over 100% for most of the 2000’s.  The increase in inventory values diluted the results for a few years from 2014/15 to 2016/17.   However, the increase in COP since 2014/15 has seen the expense ratio explode last financial year to now settle back at 99% on average and 57% for the Top20%. 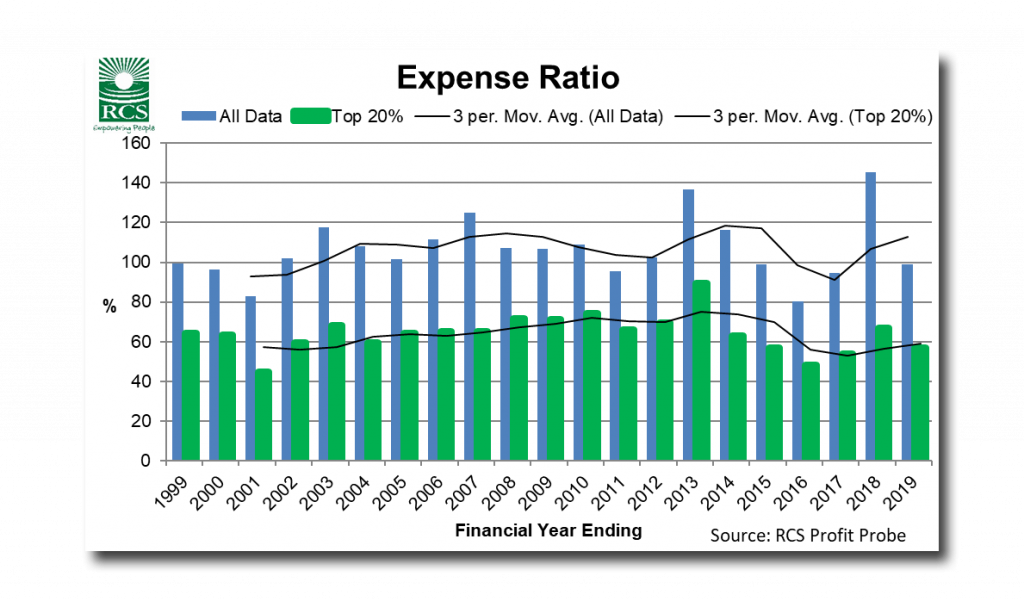 The final benchmark data I’ll include this year is gross product generated per full time equivalent (FTE) labour unit.  I prefer this KPI as an indicator of labour efficiency (compared to hectares farmed and LSU or DSE per FTE) as it focuses on the economic value contributed by each labour unit.  High labour input operations are okay if they generate the income needed to validate their work.  The Top20% businesses are now achieving a GP of over $500,000 per FTE. Comparatively, the average result is now generating approximately $350,000 GP/FTE which was the benchmark result for high performing operations 10 years ago! 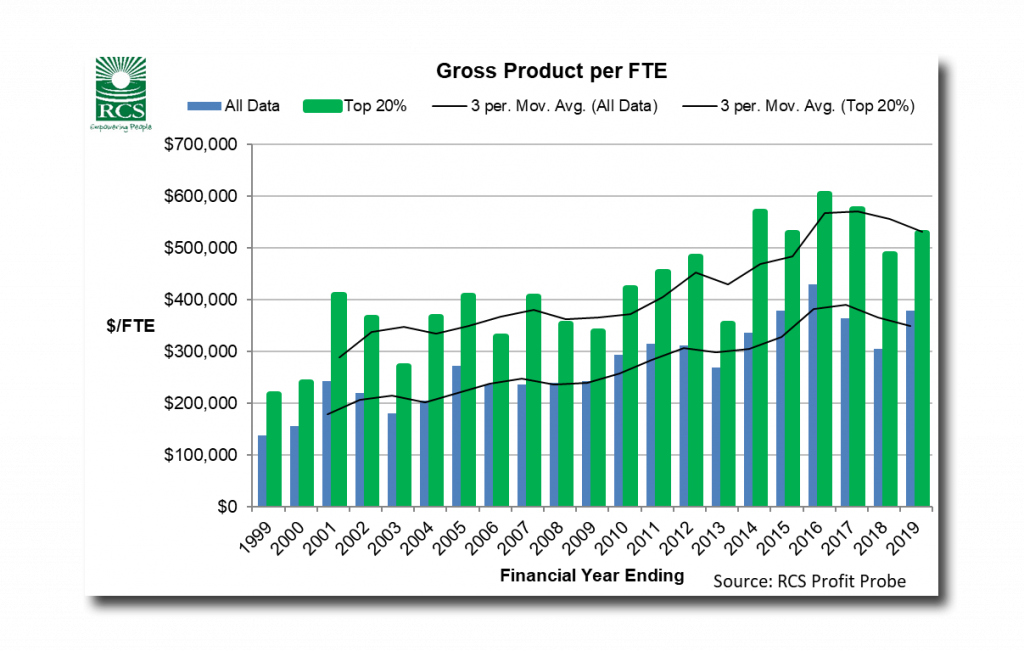 Where to from here?

I interpret these results as presenting some great opportunities for those operators who know what is going on in their business and are ready to take advantage of these opportunities when they present themselves.

This is what I’d do:

Firstly, know what the numbers are for your business.  There is no silver bullet and you need to know your current reality.  It isn’t too late to analyse your business via ProfitProbe™.

If you’ve already done that, then make sure you know what the key numbers you need to focus on are (use the help videos and documents available plus your advisor).   What are your strengths and weaknesses (we all have them)?  Build on those strengths and address your weaknesses.  Don’t look at these numbers above and think they apply directly to your business.  Know where your deadwood is and cut it out!

Ask yourself what return on investment you get from each of your costs.  Have any un-necessary costs crept in? If you had to, or wanted to, what costs could be cut out?

What does this year look like?  If you had an enterprise that made a loss last year, is it going to do it again?  If it is, then what are you going to do about it?

What will prices and seasons do in the future? Nobody can predict this.  My suggestion is that you consider your business operating model with respect to each enterprises ability to be profitable with the assumption of large variability.

To discuss benchmarking and analysing you business, contact the RCS team by;

One of our Team can visit you and help you unpack what makes your business tick. 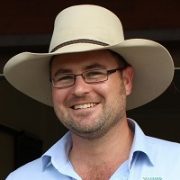