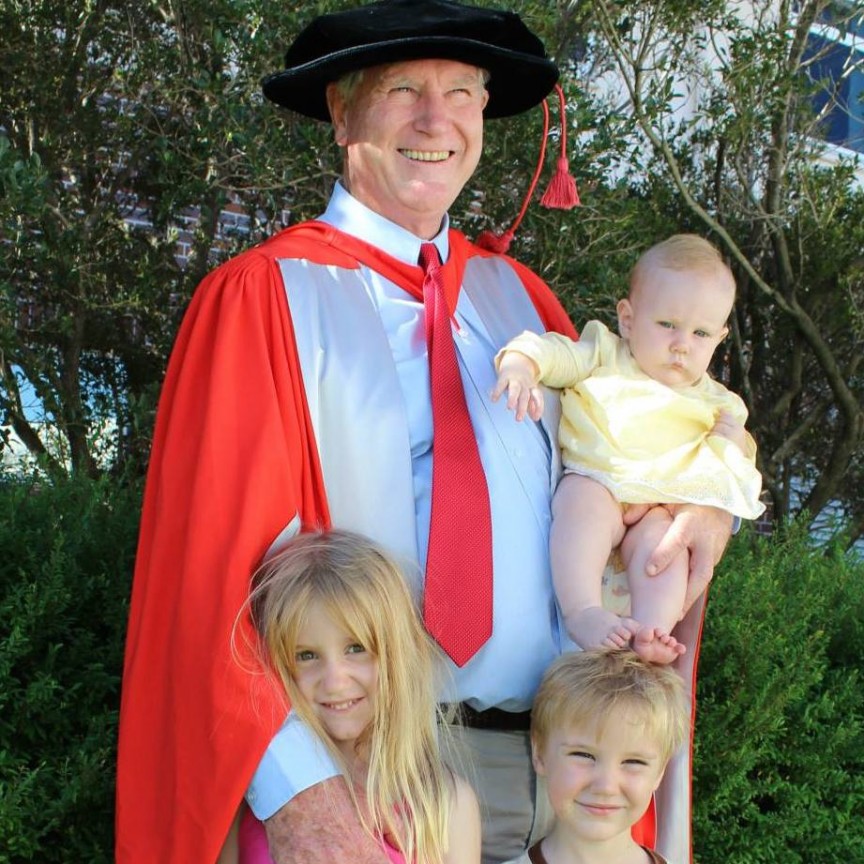 On March 26 2015, the contribution that Terry McCosker has made to the agricultural industry over his professional career was recognised when he was awarded the degree of Honorary Doctor of Agribusiness by CQUniversity. 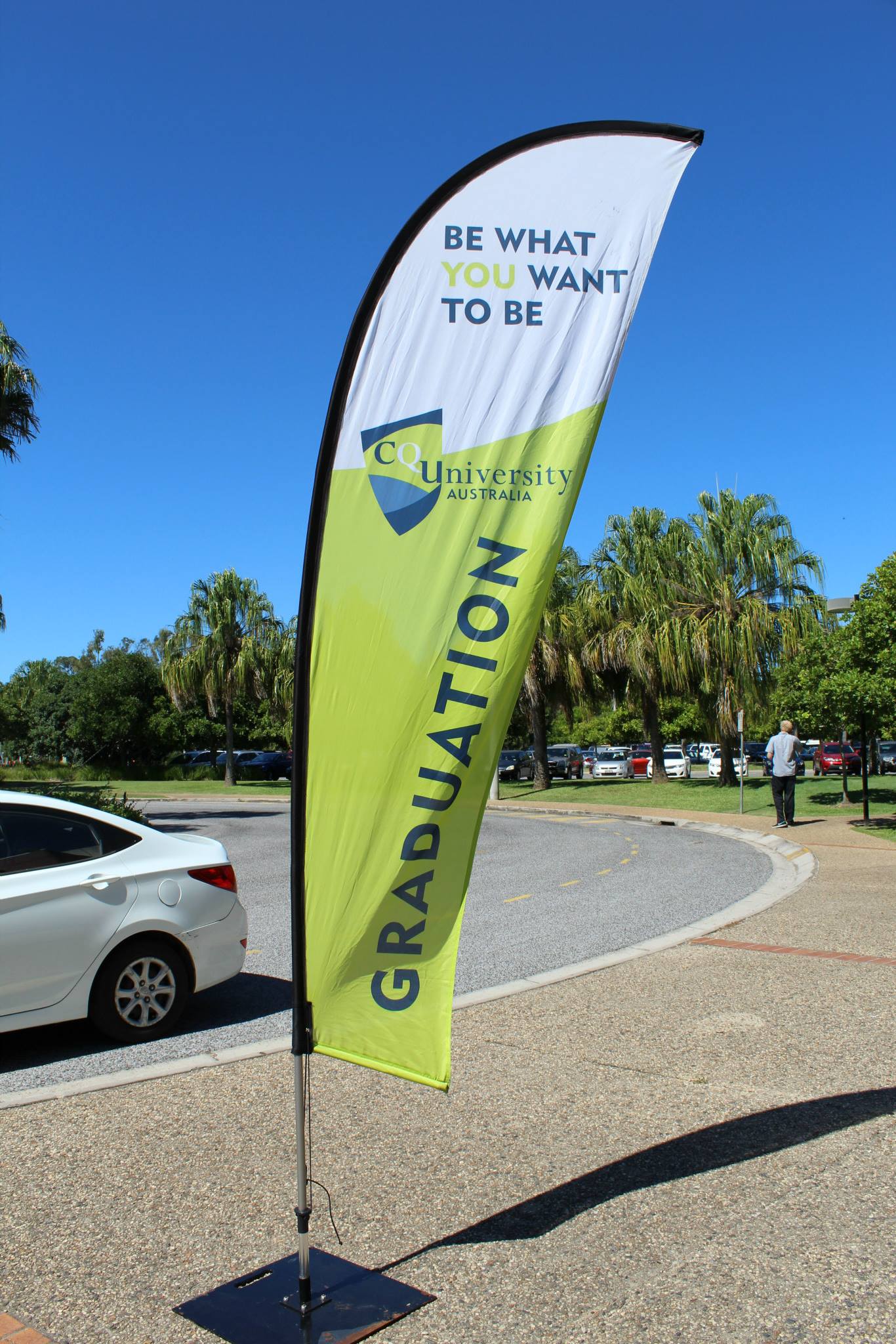 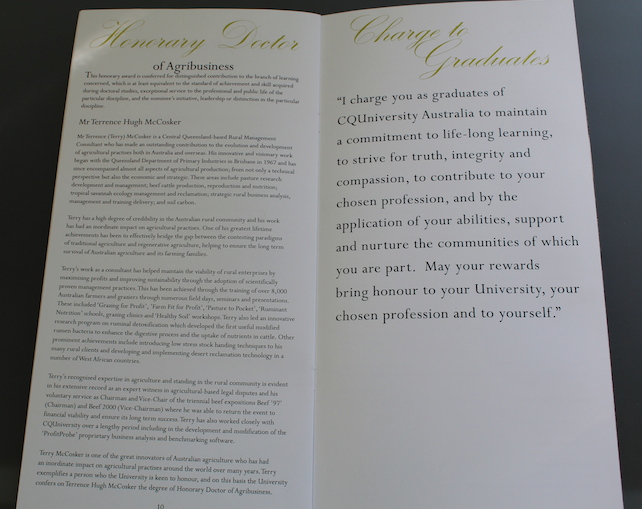 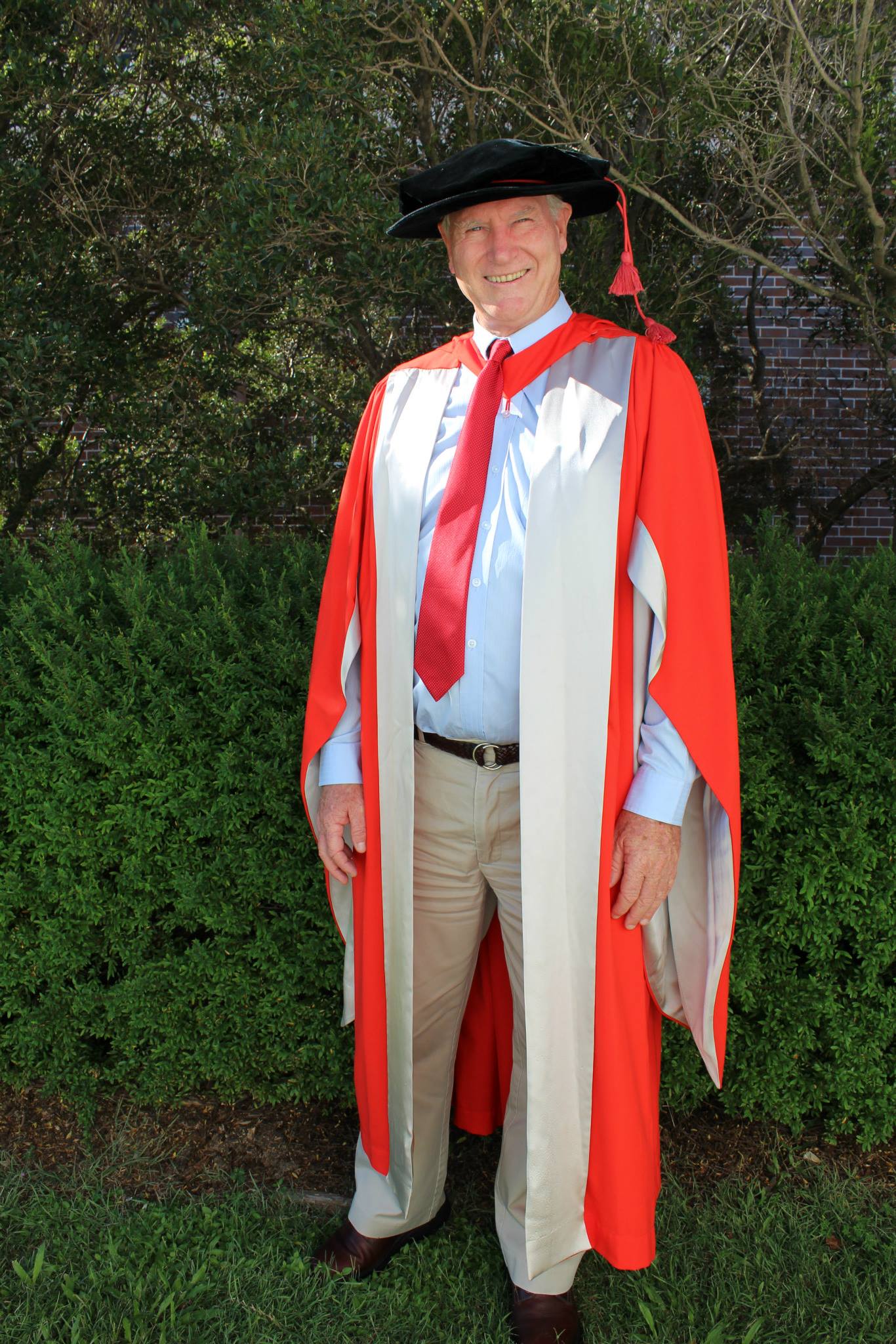 The following words in this article are courtesy of the CQ University.

This honorary award is conferred for distinguished contribution to the branch of learning concerned, which is a least equivalent to the standard of achievement and skills acquired during doctoral studies, exceptions service to the professional and public life of the particular discipline, and the nominee’s initiative, leadership or distinction in the particular discipline.
Mr Terrence Hugh McCosker 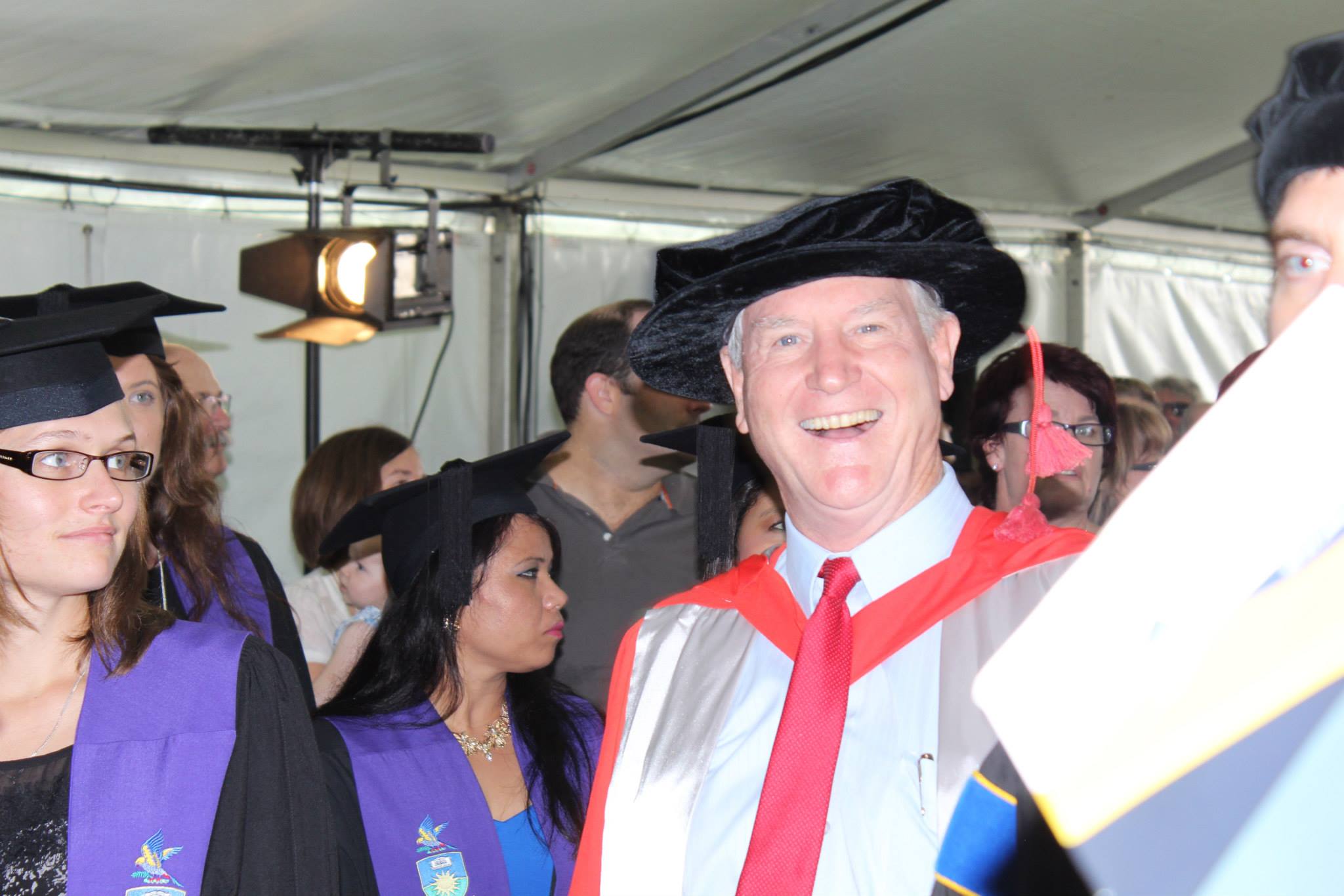 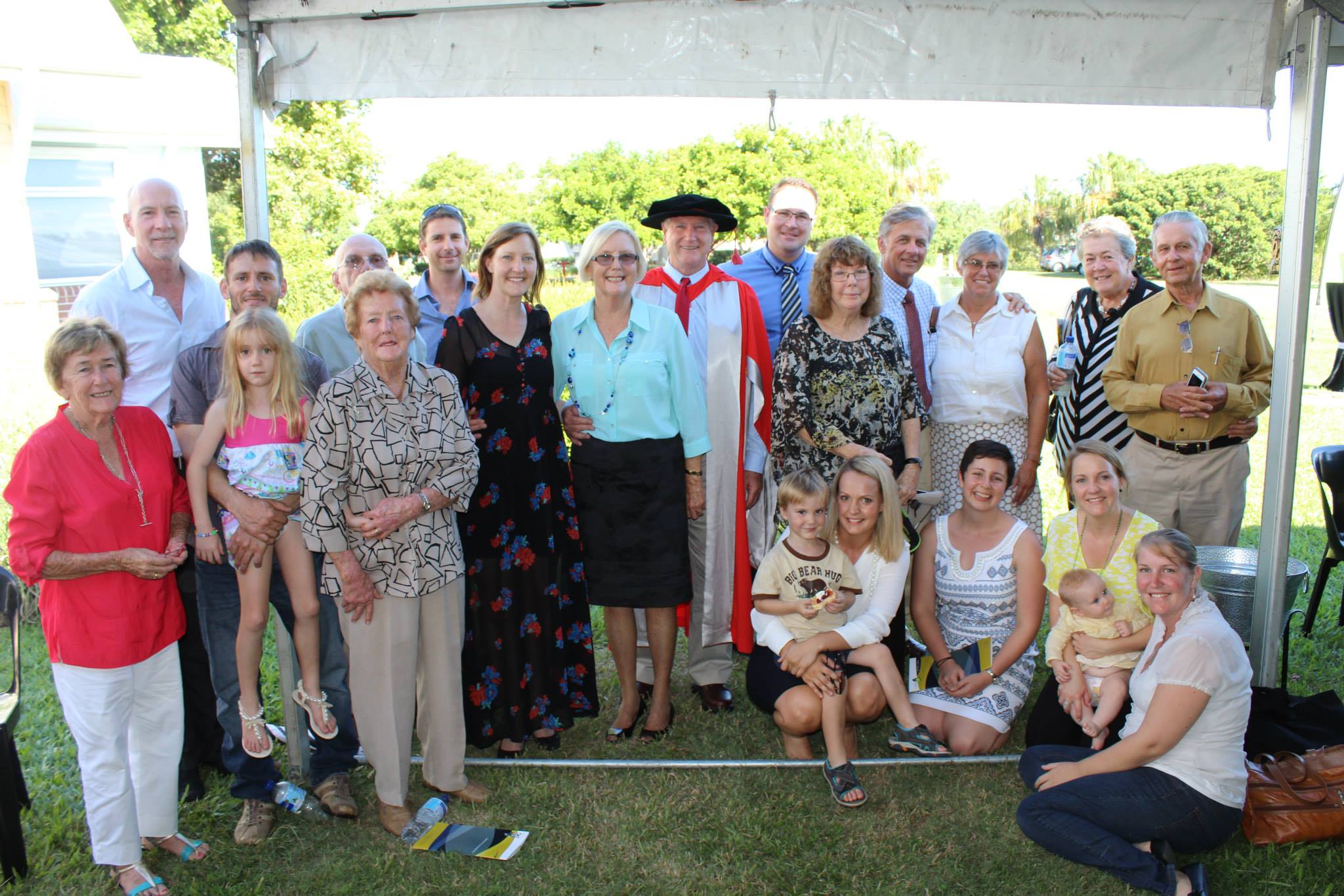 Photo above (left): Terry walking on the red carpet as part of the official party.
Photo above (right): The celebratory team present to share in the memorable occasion.

Mr Terrence (Terry) McCosker is a Central Queensland-based Rural Management Consultant who has made an outstanding contribution to the evolution and development of agriculture both in Australia and overseas. His innovative and visionary work began with the Queensland Department of Primary Industries in Brisbane in 1967 and has since encompassed almost all aspects of agricultural production; from not only a technical perspective but also the economic and strategic. These areas include pasture research development and management; beef cattle production, reproduction and nutrition; tropical Savannah ecology management and reclamation; strategic business analysis, management and training delivery; and soil carbon. 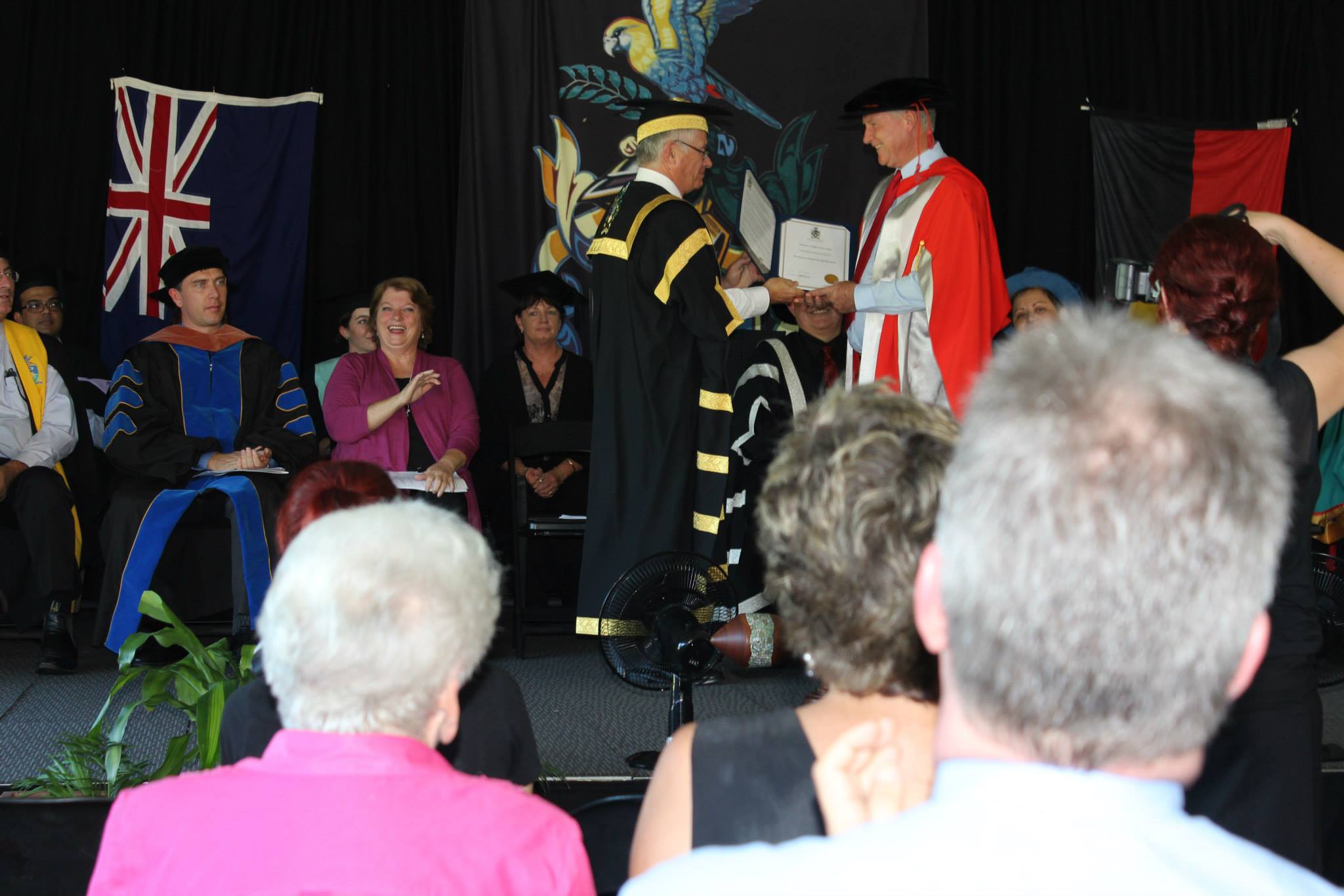 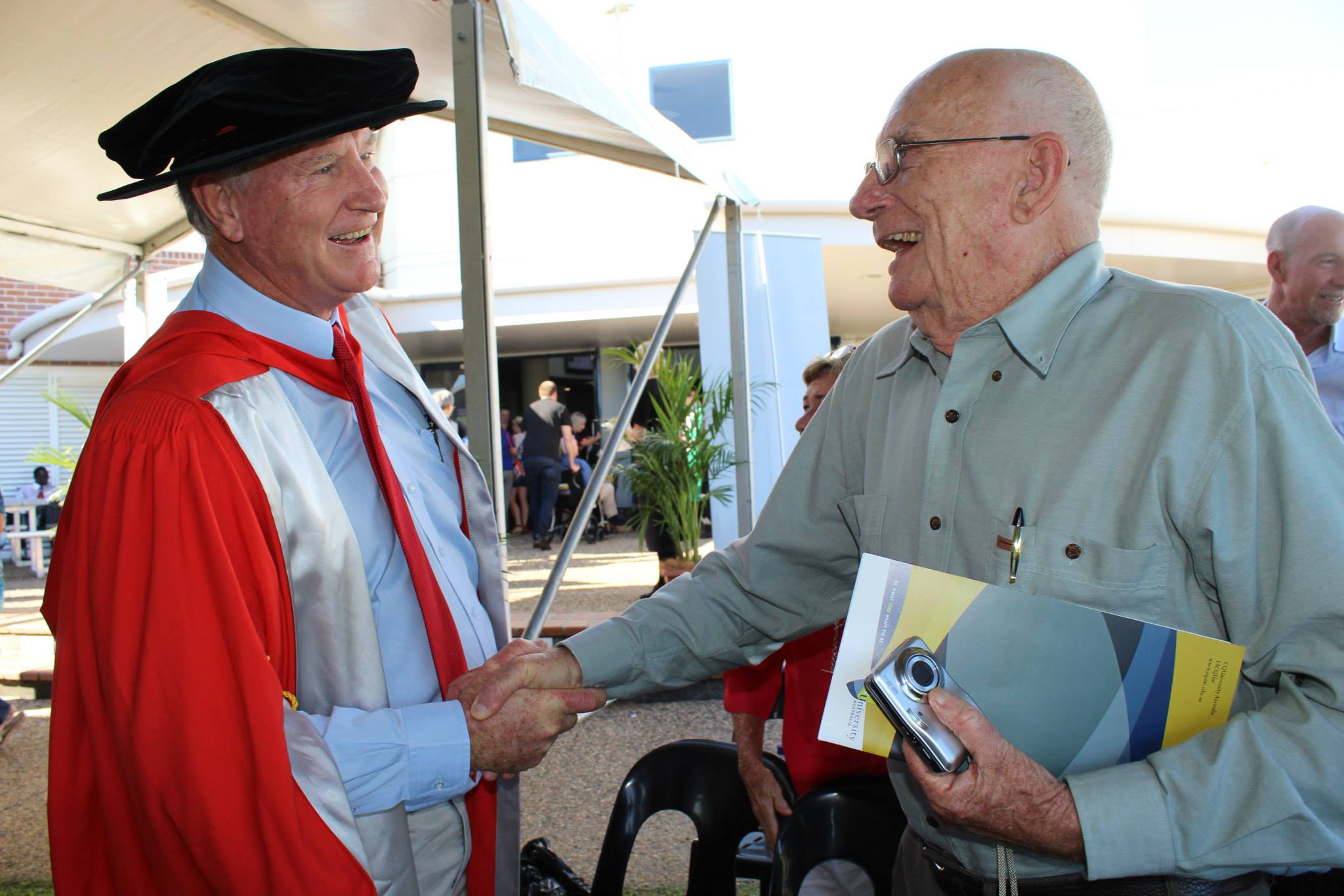 Photo above (left): Terry being awarded his Degree of Honorary Doctor by the Vice-Chancellor.
Photo above (right): Terry shares the kudos with his high school agricultural teacher John Fletcher (Fletch).

Terry has a high degree of credibility in the Australian community and his work has had an inordinate impact on agricultural practises. One of his greatest lifetime achievements has been to effectively bridge the gap between the contesting paradigms of traditional agriculture and regenerative agriculture, helping to ensure the long-term survival of Australian agriculture and its farming families.

Terry’s work as a consultant has helped maintain the viability of rural enterprises by maximising profits and improving sustainability through the adoption of scientifically proven management practices. This has been achieved through the training of over 8000 Australian farmers and graziers through numerous field days, seminars and presentations. These include “GrazingforProfit™”, “Farm Fit for Profit”, “Ruminant Nutrition” schools, “Grazing Clinics” and “Healthy Soil” workshops. Terry also led an innovative research program on ruminal detoxification which developed the first useful modified rumen bacteria to enhance the digestive process and the uptake of nutrients in cattle. Other prominent achievements include introducing low stress stock handling techniques to his many rural clients and developing and implementing desert reclamation technology in a number of West African countries. 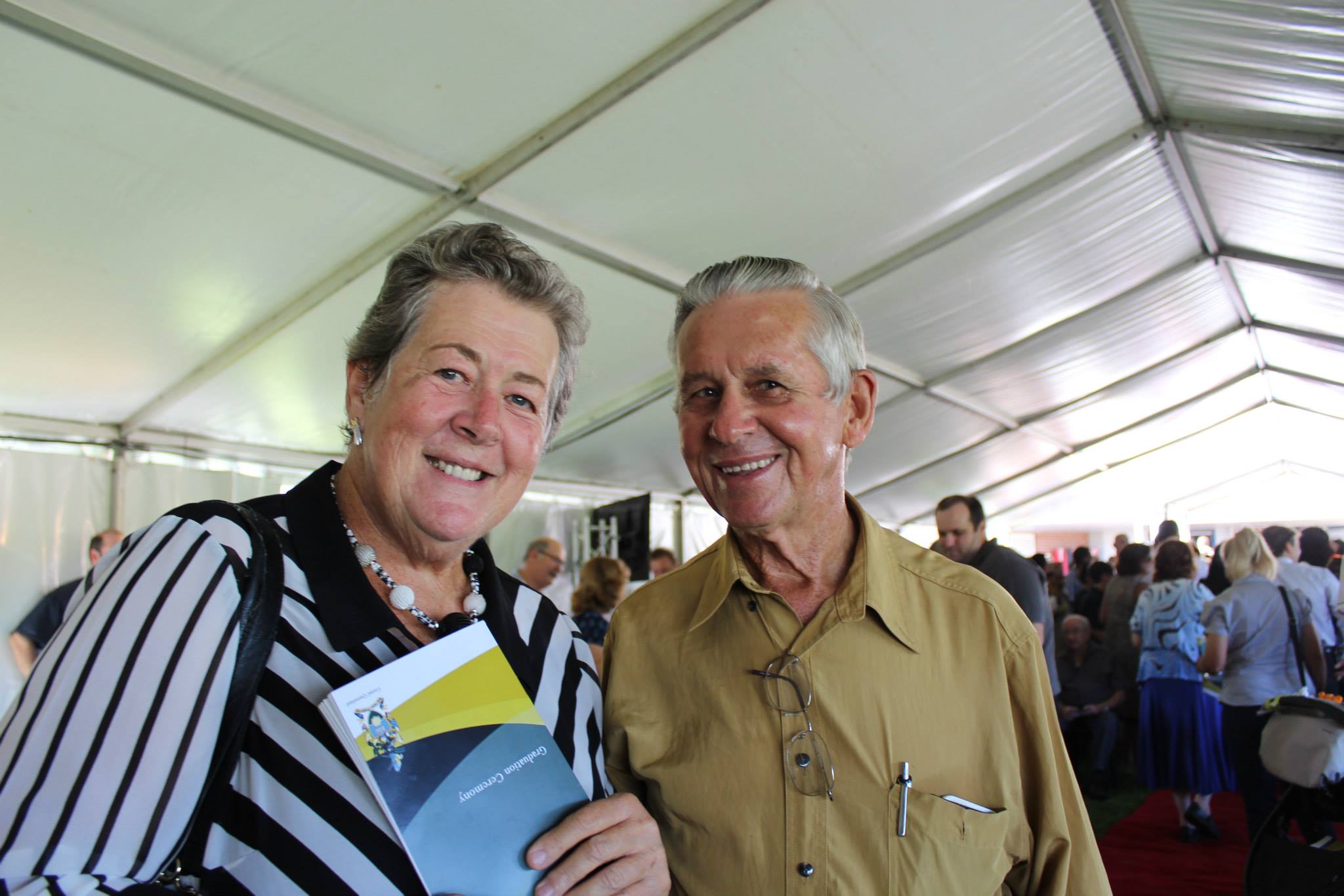 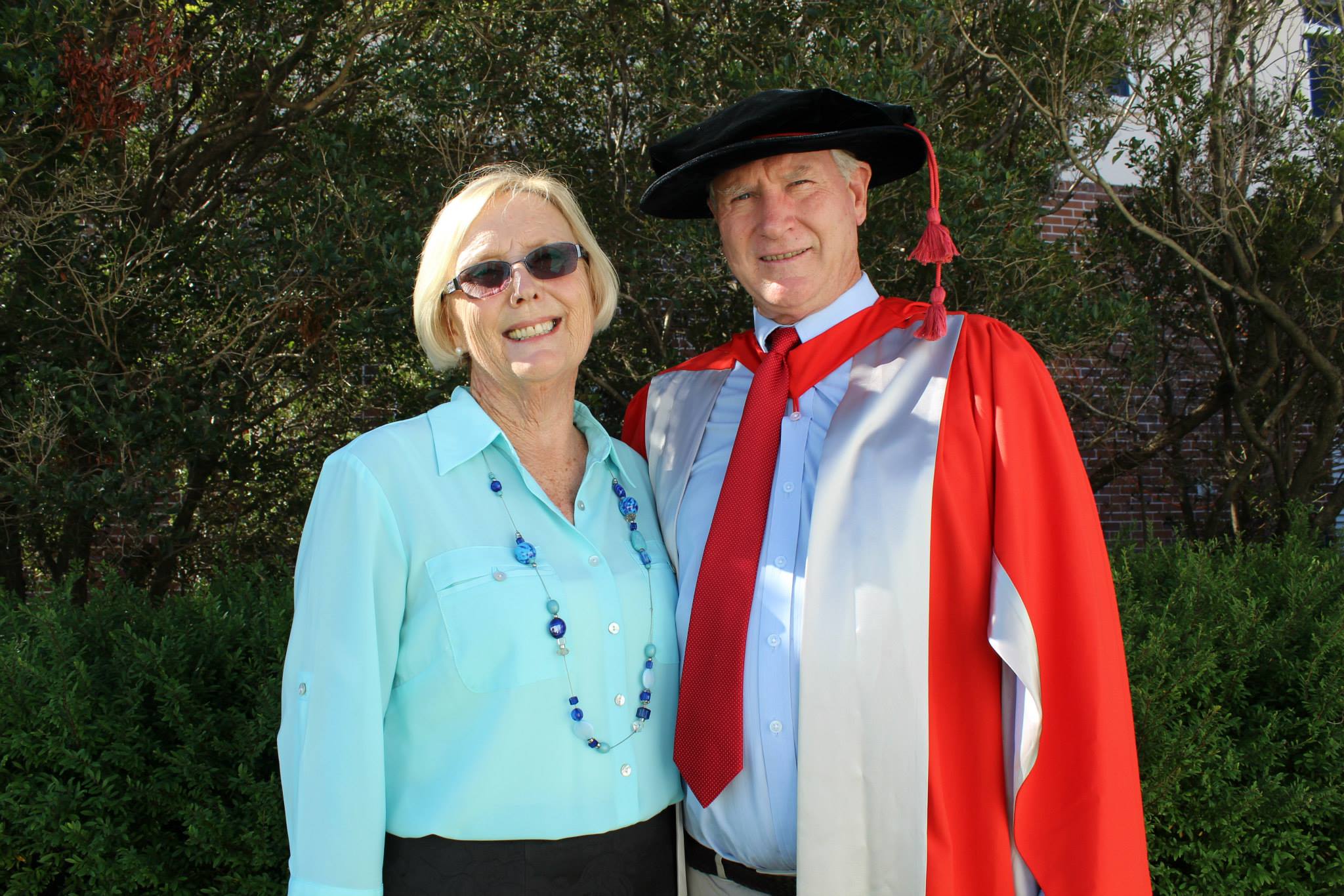 Photo above (left): Long term clients and great friends Sandra and Rob Waterson joined us for the celebration.
Photo above (right): Pam and Terry McCosker. (We think Pam deserves the “Dr” title just as much as Terry!!)

Terry’s recognised expertise and standing in the rural community is evident in his extensive record as an expert witness in agricultural-based legal disputes and his voluntary service as Chairman and Vice-Chair of the triennial beef expositions Beef ‘97’ (Chairman) and Beef 2000 (Vice-Chairman) where he was able to return the event to financial viability and ensure its long-term success. Terry has also worked closely with CQUniversity over a lengthy period including in the development and modification of the ‘ProfitProbe™’ proprietary business analysis and benchmarking software.

Terry McCosker is one of the great innovators of Australian agriculture who has had an inordinate impact on agricultural practises around the world over many years. Terry exemplifies a person who the University is keen to honour, and on this basis the University confers on Terrence Hugh McCosker the degree of Honorary Doctor of Agribusiness. 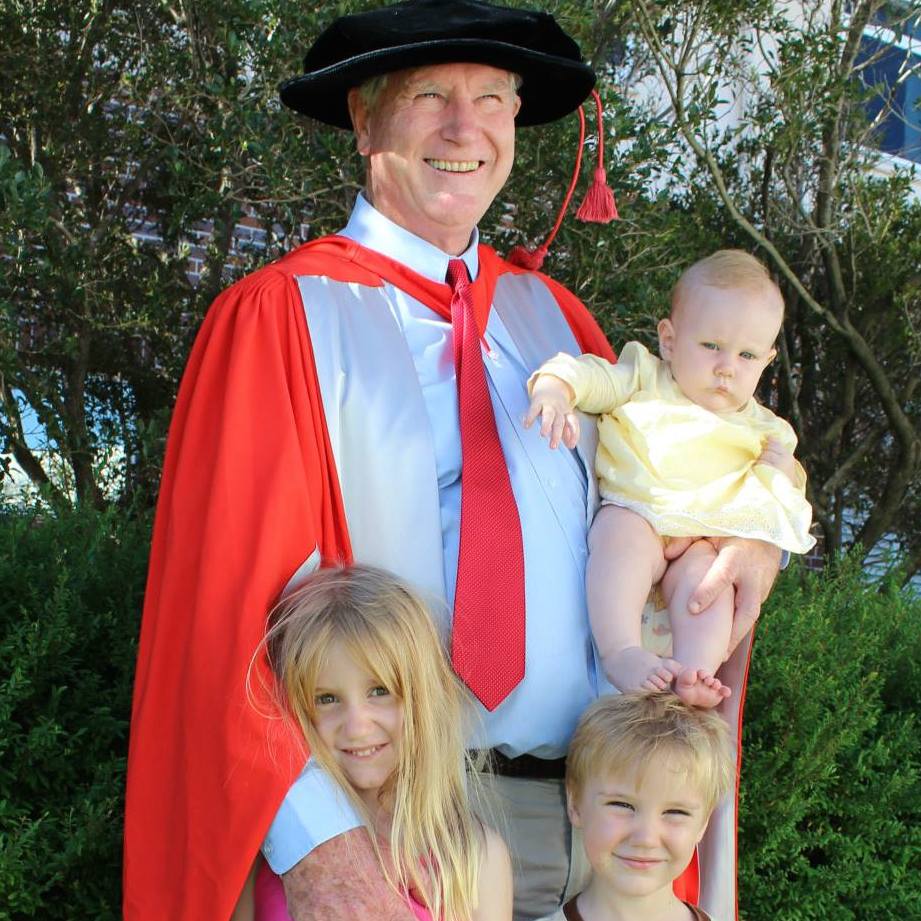 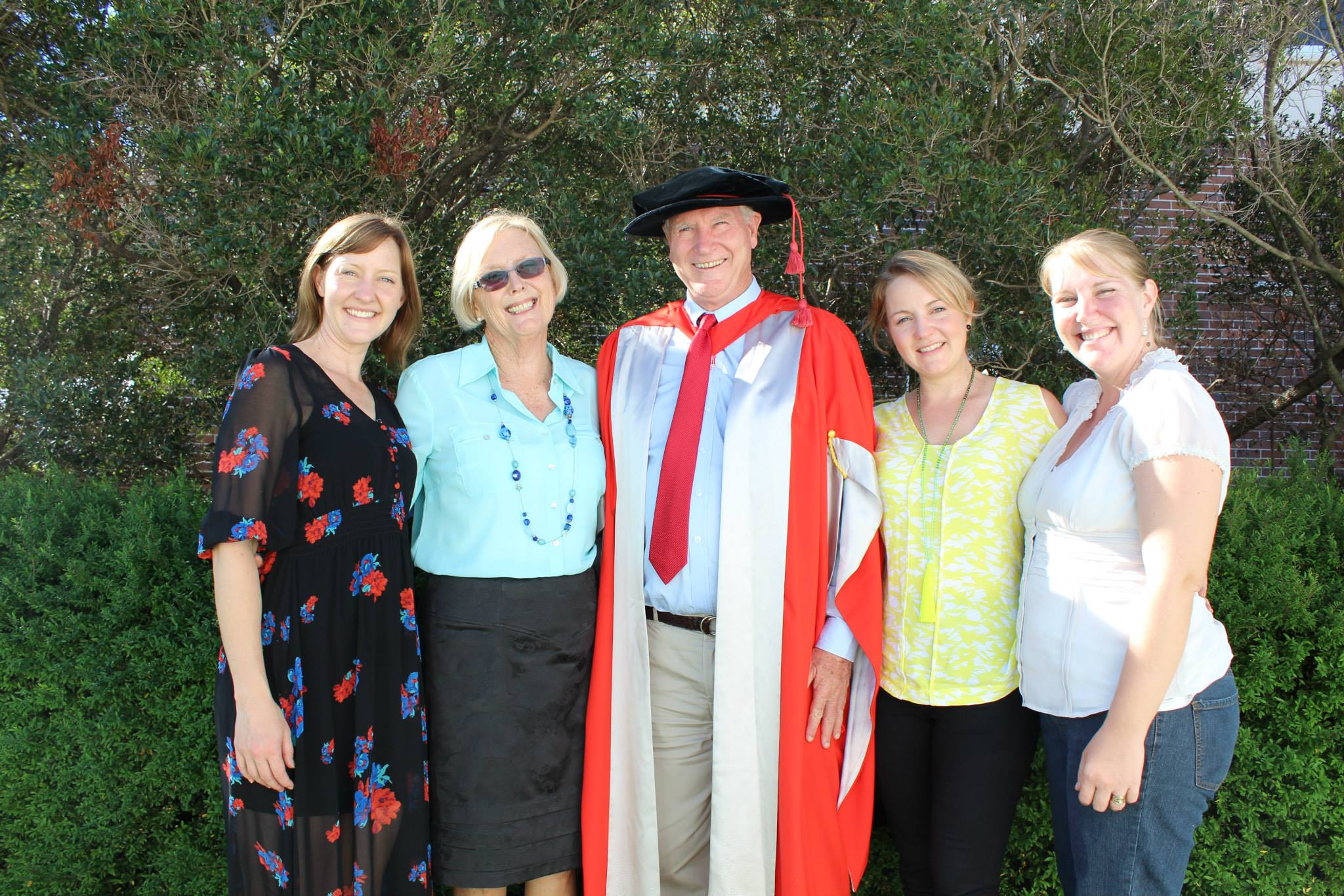 You’d typically think the outlook for a kid who failed year 7 wouldn’t be too bright, however, this couldn’t be further from the truth with Terry McCosker.

From a very proud team at RCS