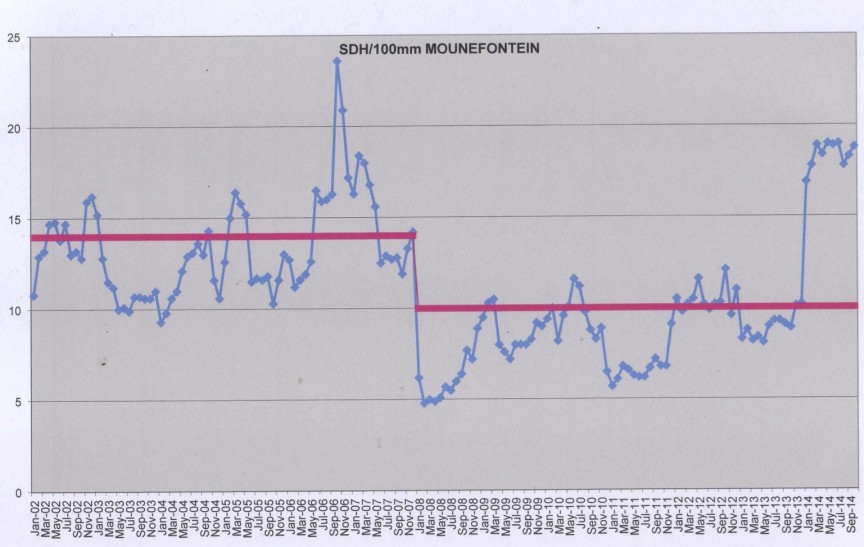 In 2008, when I visited the McLaughlins for an on-farm consult, I told them that they needed to reduce their carrying capacity benchmark. To their credit, they took a leap of faith and they did this, adjusting their stocking rate to match their actual carrying capacity (grazing management principle 2) – see graph below.

Moving the benchmark up

As water cycle, soil health and utilisation levels improve, the benchmark Carrying Capacity should be moved up.

Moving the benchmark down

There are three circumstances when the benchmark will need to be lowered. These are:

In the McLaughlin’s case, their scenario was number 1.

For the next five years, the McLaughlin’s kept their benchmark carrying capacity at 10SDH/100mm and followed the 6 RCS Regenerative Grazing Management Principles. You will see though, in 2014 their stocking rate rose to between 18 and 19 SDH/100mm.

At the recent KIT Day, after taking a property tour I asked the question to the group – “do we think that the carrying capacity benchmark needs to be increased and how do we know if it is appropriate to do so?”

There are 3 questions that should be asked at the end of each non growing season to challenge where the benchmark should be for the next year.

The tough decisions certainly pay off!

The important messages here are: